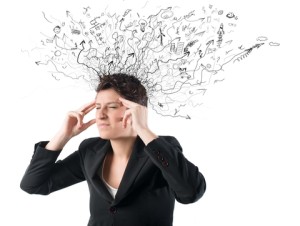 Do you ever get the feeling that you are losing it? ‘What did I come in here for?’  ‘I’ve lost my thread. What was I about to say?’ ‘Where are they? I know I put them here somewhere.’  Is this familiar? Does it sound like you? It sounds like a lot of my patients. It also sounds like me sometimes too on occasion. I know what that is like. I’ve missed planes (see Forgiveness), lost keys and very, very, very slowly, while looking the other way, driven my car into a post and written it off.

So what is going on?

When you stop to think about it, the fact that we are able to remember anything or retrieve any memory at all is incredible. We know that the brain has billions of cells with billions of connections but we don’t know how it works or even which specific parts are responsible for memories. Additionally, as we get older, almost everything we do we’ve done many times before and it becomes harder and harder to hold on to the differences between this time and that. To make things harder still,  memories, it seems, are not kept all together. The memory of a particular incident might be held in one place for its location, another for the company you were in, another for what you were wearing and yet another for what you could smell and so forth. When you consider all of this, it starts to seem like a miracle that you can remember anything at all. The whole thing is very complex and that’s before you take into account the things that you have to forget in order to have a well-functioning memory in the first place; but that’s a different story for another time.

From a homeopathic perspective

From the homeopathic point of view, at root, impaired cognitive function, as confusion and poor memory are called, is the result of a disturbance in your vital force, your being, at the very deepest level. This doesn’t mean that you could have done something different in your life and avoided being in this situation. Everything you do in life, every choice you make, your genetic make-up, what you eat, how you were brought up, what you inherited from your parents that isn’t genetic (be that epigenetic or habits) everything has an impact on the functioning of your vital force.

Confusion and the ‘I’m losing it’ feeling belong essentially, but not exclusively, to the Sycotic group of remedies. That is an enormous group that broadly manifest two aspects: ‘too much’ and ‘cover up’. In life, too much of something could be too many thoughts; too much activity; too much company; too much work; too much smoking; too much drinking; too much cannabis and so on. The cover up element is probably familiar to you in relation to ‘I’m losing it’ whether it is trying to hide or joke about your exasperation and confusion or whether it is taking those practical steps (like making notes, keeping lists) to deal with the situation. Why wouldn’t you want to keep it from other people that you aren’t feeling on top of things? Most people would. That’s part of the desperation manifested in this state. It is hidden and then you just have to blurt it out.

The homeopathic route to dealing with this state (as with all states) is to try to bring your innermost self back to its optimum state; your mind and body back to its optimum health: where your body works, your endocrine system is in balance, your brain is taking in information and is able to retrieve it easily.

From a physiological perspective

Impaired cognitive function, could be the thing we dread, the forerunner of dementia, but for the vast majority of people it isn’t and it is more likely to be happening because of hormone imbalances, stress, illness or trauma.

There are several causes of brain fog and short-term memory loss that are hormone-related: thyroid dysfunction, particularly under-functioning thyroid, adrenal fatigue, menopause and peri-menopause. Fortunately, in homeopathy we don’t need blood work done as the patient gives us the clue about where to start and how to address these problems.

Stress is the body’s reaction to a (real or perceived) threat. It causes changes in normal function such as the blood supply being diverted from the abdominal organs and the brain to the muscles (in preparation for the fight or flight part of the reaction). There are findings that show it can enhance memory and others that show it impairs it. Presumably depending on whether the memory is functionally useful for the situation. It might be really useful to remember everything you know about tigers if you are being chased, but less useful to remember what you did with your keys or someone’s phone number. To compound matters, stress causes problems in learning and making memories as well as memory retrieval.

There are, of course, many illnesses that play a part in memory loss or have confusion and poor memory as a symptom, like depression, tumours, head injury, thyroid problems, kidney, or liver disease and urine infections. There are also a lot of reasons that can contribute to poor functioning that are not to do with illness, but rather lack of wellness, such as not eating well, having a diet deficient of vitamins and minerals, having a bad reaction to certain medicines or drinking too much alcohol.

There are some famous cases of trauma leading to complete and profound memory loss although this is very rare, but even minor and emotional trauma can have an impact on short-term memory explaining why it is often hard to relate the details of what lead up to a certain incident.

Four things you do about it now?

1) Relax. I know it is easier said than done but that’s why you can suddenly remember someone’s name, what you wanted to say or a fact from school when you are not stressing about it. Take half an hour to be quiet, do nothing or follow a meditation CD.

2) Use it or lose it.  There is evidence from a University of Chicago study conducted for several

years on older people, that keeping up stimulating activity on a daily basis (going to a museum, playing cards, reading the paper, doing crosswords, painting and so on) helps with cognitive function. Tango also is said to improve cognitive function.

3) Sort out your diet. Try to ensure that you eat plenty of fruit and vegetables, particularly dark green leafy ones. Don’t get clogged up with a refined carbohydrate diet. It will gum up your digestion and gum up your head. Sorting out his diet really helped a patient of mine called Ollie. He thought his diet was fine. On the face of it, it was, but after a week of having two green juices a day for a week he felt a lot better and a lot clearer in his mind.

4) Take steps to ensure you get good sleep. That doesn’t mean going to bed early. For some people sleep is improved by going to sleep late. It’s vitally important for good brain function. See ‘I can’t sleep’.

If you are suffering from a sudden and unfamiliar bout of being confused or feeling out of control it might be worth looking at acute homeopathic remedies such as:

Aconite for confusion after a physical shock. The remedy picture for Aconite is a sudden panic and fear. Fear that everything is a disaster, even to the point that you fear you will die. There is confused thinking, and confusion of the mind and vanishing thoughts, especially when trying to recall something.

Ignatia for the confusion that comes on after an emotional trauma; not necessarily a sudden shock, it can also be called for after a sustained period of unhappiness. Confusion ‘as if in a dream’ so things that are happening don’t exactly feel real. People who might use this lose all their other thoughts because they can’t stop thinking about the emotional trauma. In the case of Ignatia, this can have been happening for a long time since an upset.

Cocculus symptoms are the feeling of reeling as if drunk from not getting enough sleep or rest or time to think. Exhaustion from, say,  looking after parents, a sick child or a baby. Cocculus has symptoms like vanishing thoughts that mean that they answer a question slowly or after a long pause, confusion about their identity (both in literal terms of forgetting who they are, but also in questioning who they are in the world), a vertigo or spinning feeling when they try to think and losing the words they were about to say.

If you are going to prescribe for yourself, click here  to take a look at the Homeopathy at Home guidelines about what it is possible to treat yourself . If you have confusion or a dodgy memory for more than a week or so, or you treat yourself and there is no improvement on a fundamental level and I would suggest that you get in touch with your homeopath or failing that your GP.